The super volcano eruption of the Phlegraean Fields

The oldest traces of volcanic deposits in the Campi Flegrie area are a good 2 million years old. These layers of rock have been excavated by drilling. The oldest existing volcanic rock was mined 60,000 years ago. 39,000 years ago (some sources indicate 36,000 years), the Campi Flegrei erupted in the most massive way, resulting in the caldera. The eruption with a VEI 7 - 8 produced between 100 and 150 cubic kilometres of trachytic tephra and deposited the Campanian Ignimbrites. This tuff layer can be found in large parts of Campania. Large areas of land were destroyed and the global average temperatures fell. According to a new hypothesis, this eruption could have been the beginning of the end of the Neanderthal.

Recently, a 1 m thick tuff layer was discovered in Romania, which is attributed to the Campi Flegrei eruption. The tuff layer is located about 1500 km from the Phlegraean Fields and is being investigated by scientists of the Max Planck Institute. It is assumed that the eruption was even worse than previously thought. 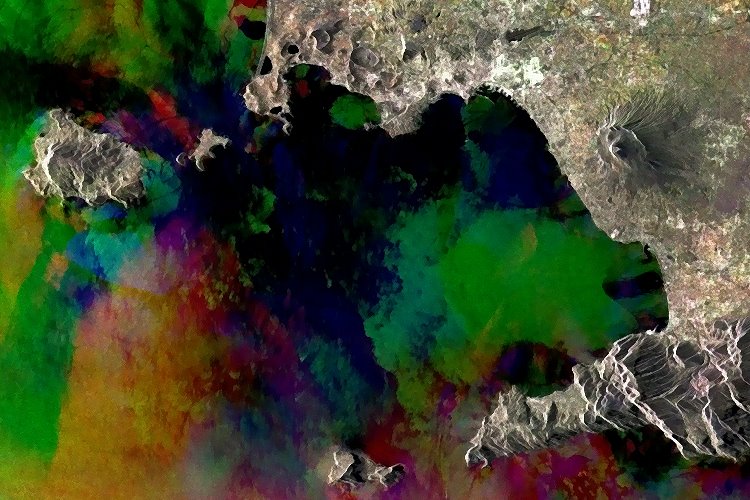 At the upper edge of the picture one recognizes numerous craters of the PhlegrÃ¤ischen fields. 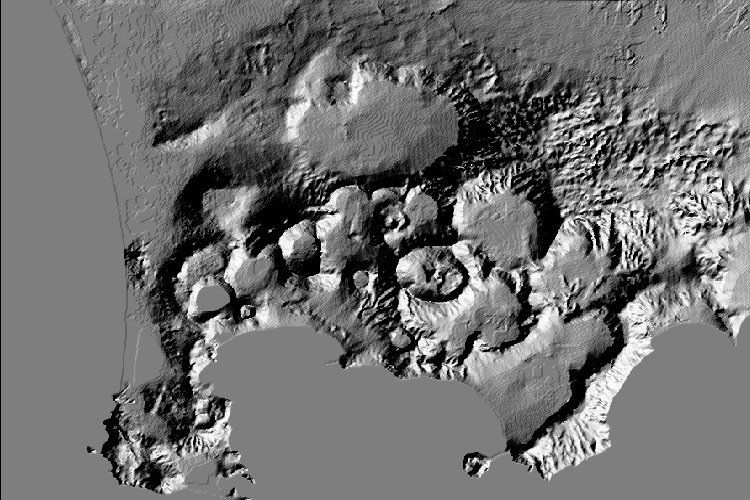 The many craters in the caldera of Campi Flegrei. 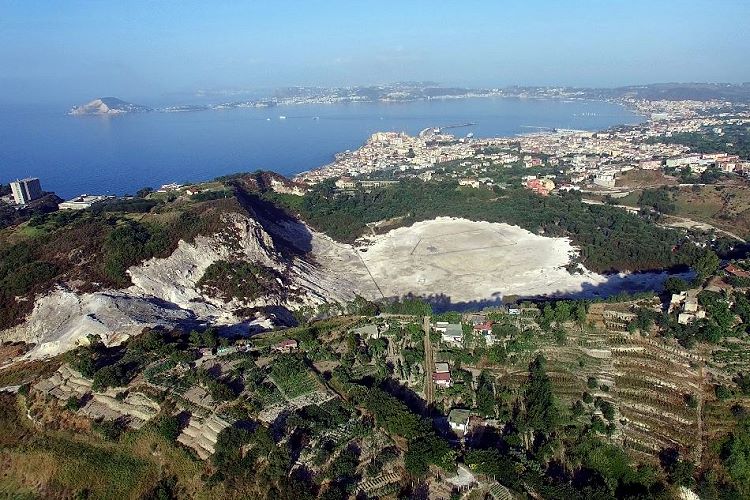 The crater of the Solfatara from the air. 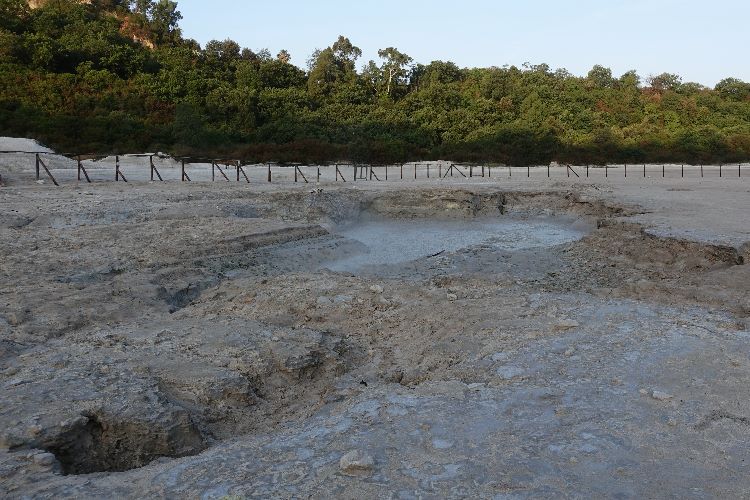 The big mud pool in the Solfatara. 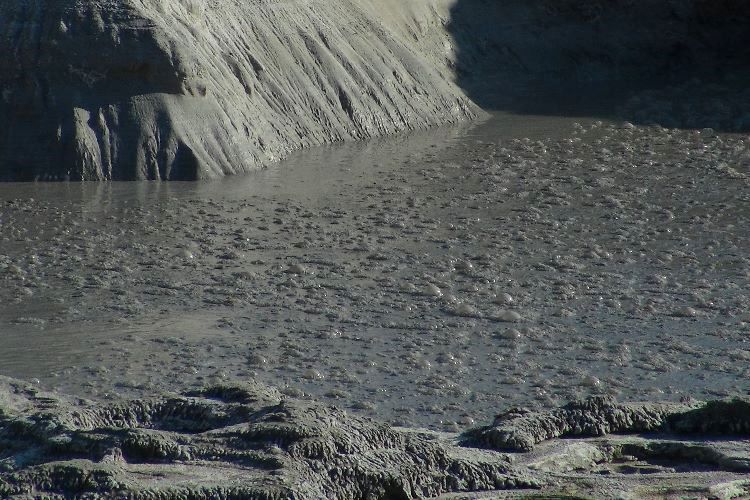 The bubbles come from degassing fumaroles at the bottom of the pool. 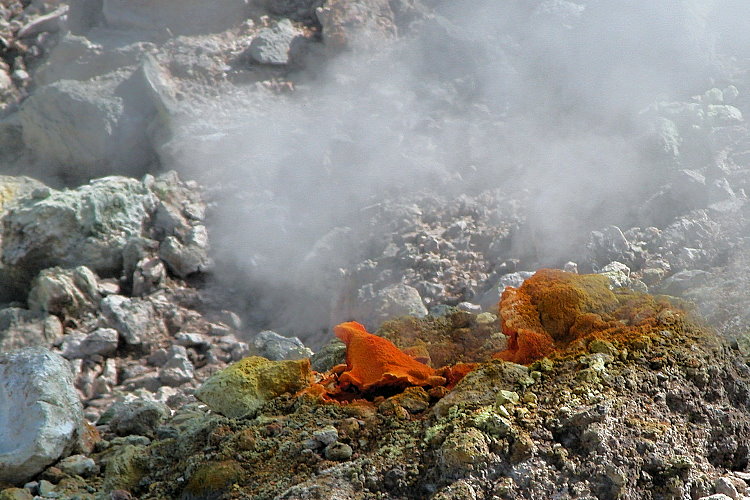 The largest fumarole in the Solfatara is over 200 degrees hot.

In the period after this eruption, a series of smaller volcanic eruptions occurred, mainly concentrated along the caldera rim. Some eruption centers were located in what is now Naples.

Another major eruption occurred 15,000 years ago, which produced about 30 cubic kilometers of tephra and had a VEI 7. It formed the so-called "Yellow Neaoplitan Tuff"

The volcanic eruption of Solfatara

Over the next millennia, several eruptive phases with eruptions within the caldera occurred. These eruptive phases were interrupted by pauses that lasted from centuries to millennia. One of the last major eruptive phases took place between 4800 and 3800 years before today. Northeast of Pozzuolis, numerous vents opened and a large crater was formed, which today houses Lake Avernus. In total, 16 explosive and 4 effusive eruptions occurred during this eruption phase.

In historical times there were 2 eruptions in the Phlegraean Fields. In 1158 the Solfatara erupted near Pouzzuoli and in 1538 the youngest volcanic cone to date, Monte Nuovo, was created. It is the last of more than 50 volcanic craters that formed in the Phlegreean Fields.

Impressive, because visible for everyone, are the traces of volcanism in the Solfatara. It was formed about 4000 years ago. The crater has a diameter of 770 meters and opens towards the Gulf of Pozzuoli. It lies at an altitude of 92 meters. One big and several small mud pools bubble in the crater. Fumaroles produce sulphur vapours at over 200 degrees. When you walk through the crater the steps sound hollow in some places. Who wants to visit the crater has to pay entrance fee. In the wooded part of the crater there is a camping site. Whoever stays overnight here has free entrance and can also stay there outside the opening hours.

The bradyseismos of Campi Flegrei

The phenomenon of bradyseism proves that the ground is anything but stable and that there is still some movement here. Especially along the coast in the Gulf of Pozzuoli the earth rises and falls by up to 3 meters. In the times of the ancient Romans, the earth movements were so strong that the ancient Marcellum sank to below sea level; the traces of drilling shells on the ancient columns are proof of this. These earth movements take place in phases and are accompanied by earthquakes. Between 1969 and 1972 and then again between 1982 and 1984 there were 2 such phases, during which the coast rose and fell by 1.8 metres. More than 10,000 light earthquakes took place in these phases. Numerous buildings in the old town of Pozzuoli were badly damaged and had to be extensively renovated. According to recent research results, the bradyseism is caused by the penetration of fluids in the underground of the caldera. In 2000 and 2001, the subsoil was raised by 90 centimetres and a seismic crisis occurred; the INGV was about to issue evacuation recommendations because a new volcanic eruption was feared. Thousands of people would be affected by such an eruption today; there are numerous settlements in the caldera and even on the crater rim of the Solfatara there are blocks of flats. 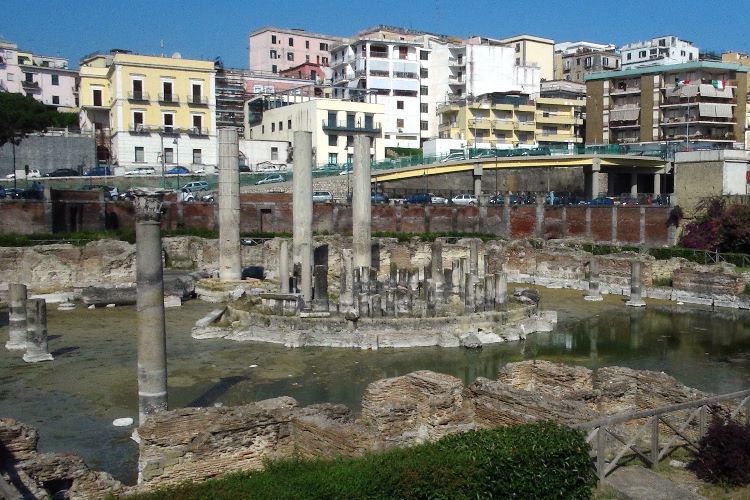 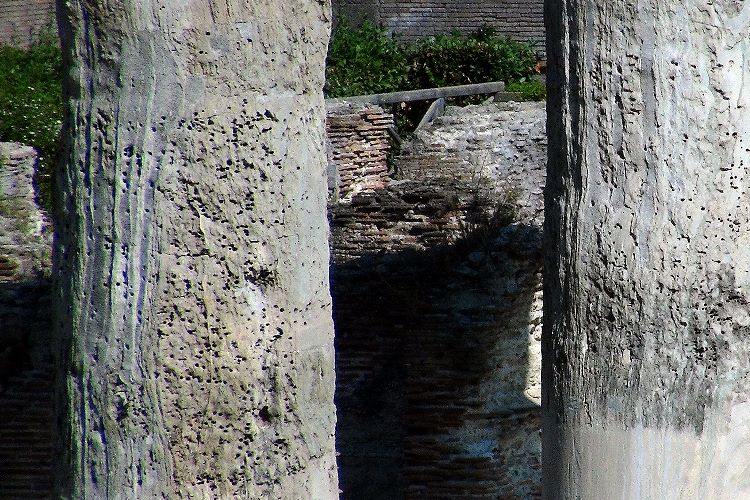 The holes in the columns are from drill shells. 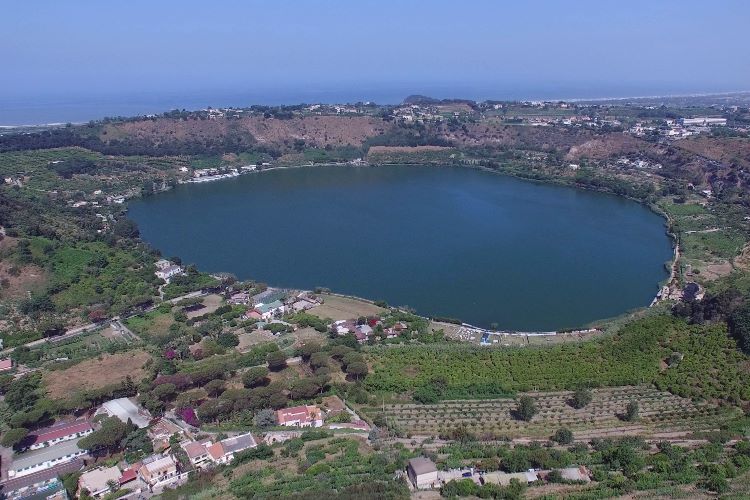 Lago d'Averno lies in one of the volcanic craters.

Today's consequences of a super volcano eruption near Naples.

Although Vesuvius is considered the fateful mountain of Naples, a supervolcano eruption of the Phlegraean Fields would have far more dramatic consequences for the conurbation in the Gulf of Naples than any eruption of Vesuvius 15 km away. Already an eruption with a VEI 7 would most likely destroy the home of 4 million people. A VEI 8 eruption would, depending on the wind direction, even cover Rome, 250 km away, with ash. The ash cloud would cross the Alps and cause ash flooding in Germany. Air traffic over Europe would come to a standstill. Such a catastrophe would have fatal consequences for the world economy. In the latest scientific studies, researchers assume that an eruption could begin much earlier and faster than was believed until recently. There are also increasing signs that the volcano is preparing for an eruption. That's why it's on warning level "yellow".

Considering the flight chaos caused by the comparatively weak eruption of Eyjafjallajökull (0.14 cubic kilometres of tephra were produced in the first 3 days) in spring 2010, it does not take much imagination to imagine the effects of a volcanic eruption that produces more than 1000 times the amount of lava and blows it into the stratosphere.

An exploration well is to be drilled in autumn 2010. The volcanologists want to explore the underground of Campi Flegrei to a depth of 4 km. Local residents are protesting against this project because they fear that the drilling could cause an eruption of the volcano. 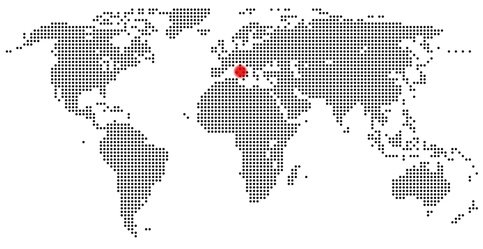