Pompeii, the bustling city on the Gulf of Naples, passed away in a dramatic volcanic catastrophe rarely experienced by mankind. For the scientists of modern times, however, the tragedy was a stroke of luck, because both the life and death of the city were preserved in a snapshot, buried under a twelve-meter thick layer of ash and pumice. It is thanks to modern research and the surviving letters of an eyewitness that we are able to reconstruct the course of the catastrophe today, almost 2000 years after the devastating eruption of Vesuvius.

The rise of Pompeii

Pompeii was founded by the Greeks in the 6th century BC. A small rise on an old lava flow of Vesuvius offered a good view over the terrain and thus protection from hostile Etruscans. At the mouth of the river Sarno a small harbour was built where goods from the surrounding area were shipped. Wine and olive trees grew on the fertile slopes of the volcano, further inland cereals were cultivated. Thus Pompeii developed into a prosperous trading city within a few centuries. In 290 BC the city was occupied by the Romans. Since that time, rich citizens have fled every summer from the sultry confines of Rome to Pompeii. The fortified city grew. Three thermal baths were built and lead water pipes were laid. Pompeii had a theatre, an odeon and an arena. Besides trade, art and culture flourished. The Romans also encouraged carnal lust: 13 public brothels were discovered during the excavations. Grain was ground in biconical mills made of lava rock and baked into bread in the 31 bakeries. In the cookshops - the Thermopolien - the citizens ate a quick meal standing up. In 62 AD, large parts of Pompeii were destroyed by an earthquake. The money from Rome flowed sparsely and so the reconstruction dragged on for years. When in 79 A.D. the final out of the city was sealed by Vesuvius, not all the damage of the quake had been repaired when the final end of the city was sealed. 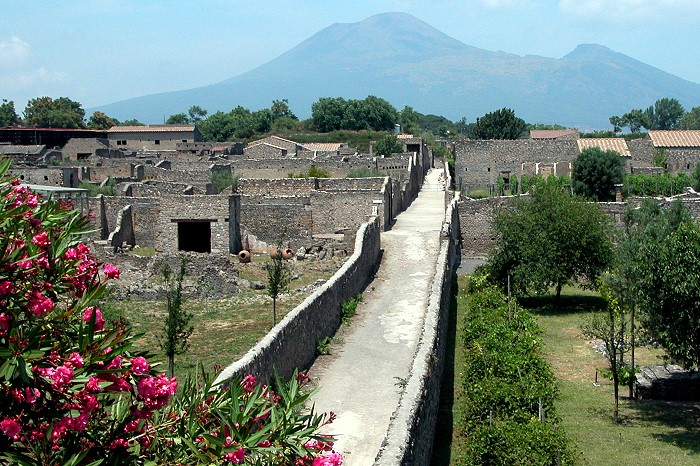 View over Pompeii with Vesuvius in the background. 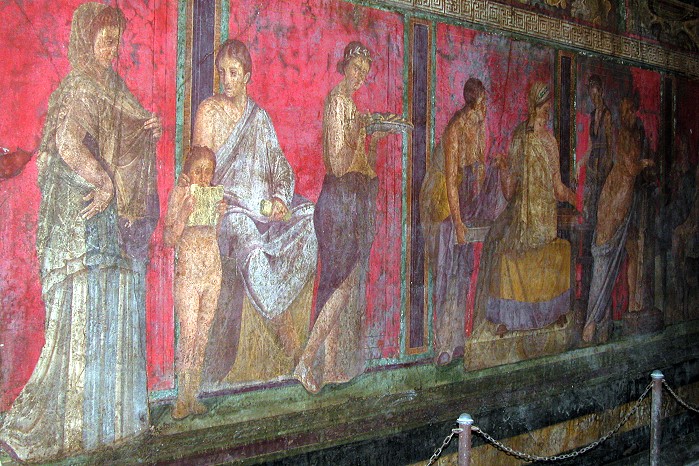 Wall fresco in the Villa Mysteria. 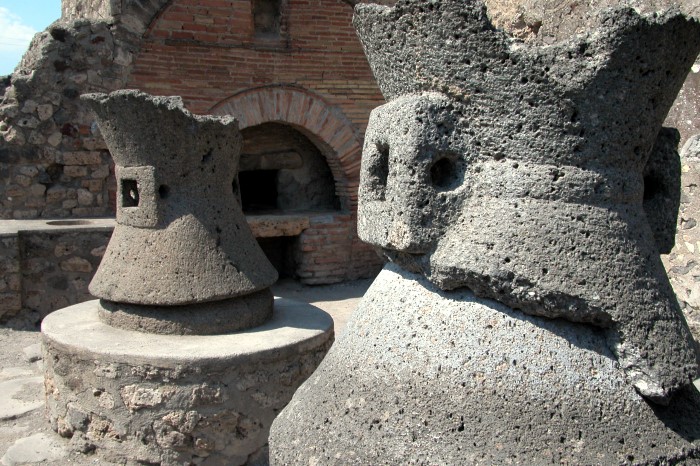 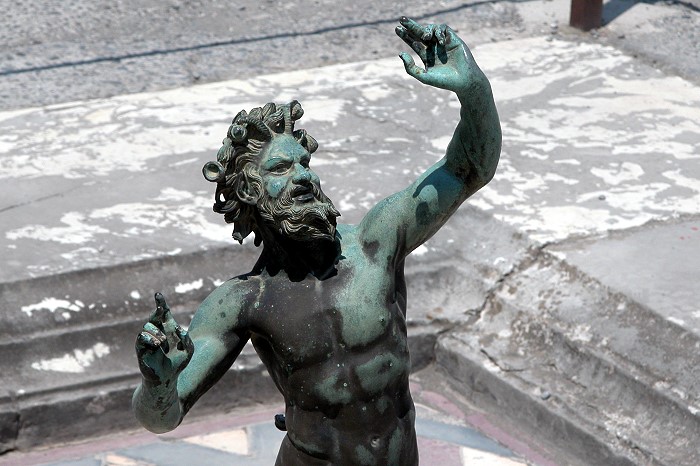 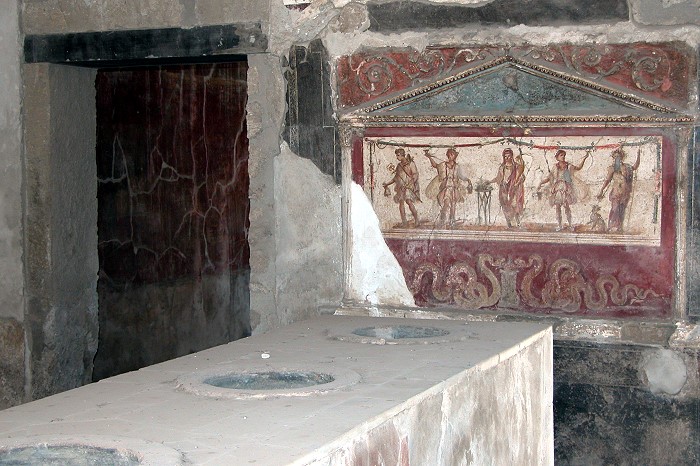 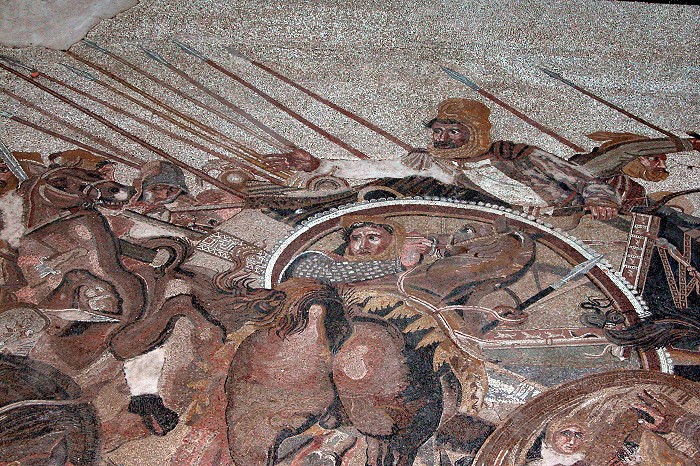 Mosaic of the Battle of Hadrian.

The fall of Pompeii

It was a mild summer morning on that Oktober 24, 79, when the ground in Pompeii was once again shaking. The thunder of a violent explosion abruptly tore the citizens from their daily lives. Frightened, they looked towards Vesuvius, from which the terrible noise emanated, and they saw that the mountain had blown away its summit. In its place a crater had appeared, from which columns of fire were beating. A grey, pine-shaped cloud of dust and rock debris darkened the sky within minutes and turned day into night. The distraught people feared the wrath of the gods. Torches were lit, prayers were said, but it was no use: half an hour later volcanic ash, dust, lapilli and foamy pieces of pumice poured down on Pompeii.

At the summit of Vesuvius, ten kilometers away, an inferno raged. Under high pressure, the volcano tirelessly spewed fragmented lava. Glowing lumps and debris of old rock rumbled down to the valley and burned the vegetation on the volcanic slope. The eruption cloud had meanwhile reached the stratosphere. The city had the misfortune that the wind blew from the direction of Vesuvius and drove the cloud towards it. Rocks were hailing from the cloud. The deposits in Pompeii grew upwards at a speed of 20 centimeters per hour. People panicked, many gathered their belongings and tried to flee. Others sought shelter in their homes. But the open construction of the atrium houses offered insufficient protection. Toxic gases penetrated the rooms, the roofs groaned under their stone load. Already in the afternoon, many a roof structure gave way and collapsed.

The first phase of the eruption lasted twelve hours. Around midnight, the bombardment from volcanic products subsided. The inhabitants of Pompeii believed they had survived the worst, but the respite was short.

As the pressure from the crater decreased, the rising eruption cloud collapsed, generating pyroclastic flows. The first glowing clouds did not reach Pompeii, however, but destroyed the neighbouring city of Herculaneum. Herculaneum was much closer to Vesuvius than Pompeii, but until then it had been largely spared from the eruption. In the pyroclastic flows the people died an agonizing death. Even those who had found shelter in a house burned to death in the 800 degree hot gases on which a stream of ashes and rocks moved, crushing everything that the gases had not destroyed.

In the early morning hours of 25 August, four pyroclastic flows reached Pompeii, killing everyone who was still alive in the city. Pompeii was now completely buried under tephra. In the course of the day two more pyroclastic flows occurred, which finally covered the former city area. Pompeii was now buried under a shroud twelve metres thick. In Herculaneum, which was only six kilometers away from the crater, the volcanic deposits piled up to a height of 20 meters. The sunken cities were forgotten. If there had been the technical possibilities then as there are today, the sinking of Pompeii and Herculaneum could probably not have been prevented, but the cities would have been evacuated and the events would have been precisely documented. Thus, apart from the ruins, there are only a few eyewitness accounts of the natural catastrophe that have been handed down in writing.

The excavations of Pompeii 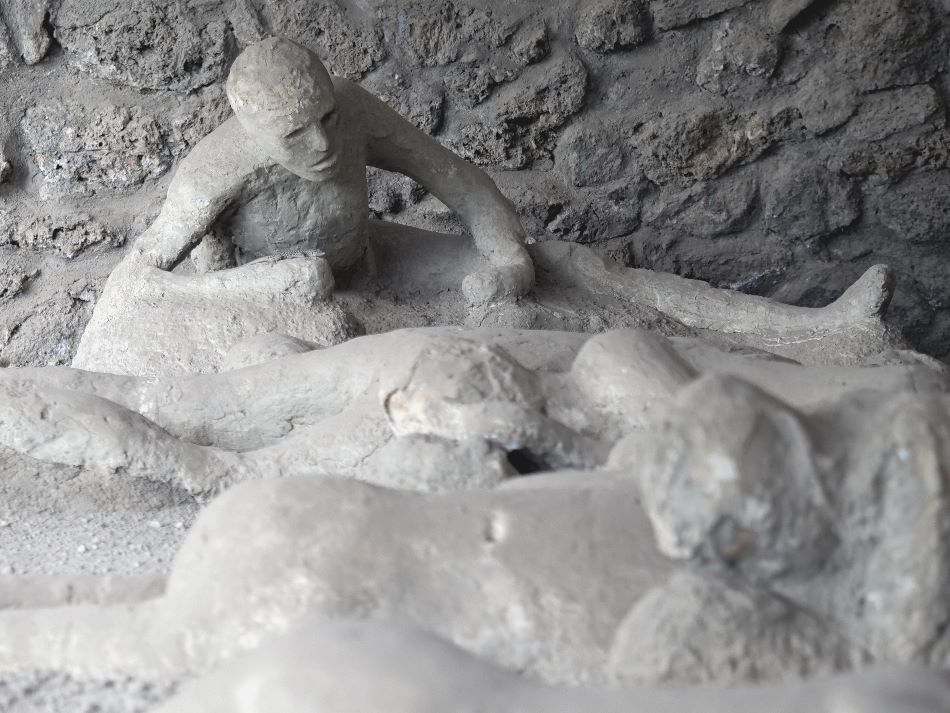 Pompeii SacrificesThe sunken cities were legends from a long time ago, when towards the end of the 16th century some pieces of marble and coins were accidentally found on their territory. Little by little, the ancient treasures were looted. It was looted and stolen. Many treasures fell into the hands of dubious collectors during this time. It was not until the 18th century that systematic excavations began - the birth of modern archaeology. To date, a good four fifths of the old city area has been uncovered. More than 2000 corpses have been found, mostly as cavities in the lava rock, which were filled with plaster. However, the scientists assume a total of more than 16,000 victims. This estimate also includes the perished inhabitants of the surrounding area. The population of Pompeii at the time of the disaster was about 20,000.

The eruption in 79 was not the first major catastrophe to emanate from Vesuvius. A good 1800 years earlier the volcano had already buried the huts of a Bronze Age settlement under ashes. Away from these huts, archaeologists found the skeletons of two people whose footprints had been preserved in the ashes. It was probably a pair of farmers who had been fleeing the eruptions. The settlement was located near the present-day village of Avellino, northeast of the volcano and much further away from it than Pompeii. At a distance of 35 kilometres, the layer of ash deposits was still 50 centimetres thick. Scientists discovered traces of repopulation after the eruption, but apparently this attempt was unsuccessful due to environmental destruction. According to volcanologists, such a catastrophe could repeat itself in the near future. However, unlike in the past, the population of the Naples conurbation is now not just a few thousand people, but millions. In the event of an eruption such as that which occurred in 79 AD, 800,000 people would now be directly affected. A successful evacuation depends on the length of the early warning period. Vesuvius is one of the best observed volcanoes on Earth, and the observatory on this mountain, established in 1841, was the first of its kind. Italy can therefore be considered the cradle of volcanology and modern archaeology at the same time.

A lot has happened since the first observatory with its mechanical measuring instruments was built. Today Vesuvius is monitored with the most modern computer technology. Even a virtual walk through the resurrected Pompeii is possible.

What does the future of Pompeii look like? The answer is: bad! The ravages of time are eating away at the excavated ruins. Sun, wind, rain, pollution and the feet of countless tourists are giving the ancient walls a hard time. The ruins are defenceless. Again and again walls and roofs collapse, mostly after heavy rainfalls: on 6.11.2010 a house of the gladiator school collapsed, some days later a wall at the "House of the Moralist" gave way. There is no money for better protection. Pompeii is visited by about 3 million tourists every year and that for an entrance fee of 11 Euro. Some of the money trickles away in the mafia-like structures of Italy. Paradoxically, Pompeii was safe from further destruction as long as it was covered by pumice and ashes. Thus some researchers are calling for the excavation to be buried under the ground again in order to preserve it for posterity. The politicians of course do not think much of this plan and announced now to act: in the early summer of 2012 a large-scale restoration project is to start. Let's see if it is put into practice. Rays of hope are provided by private initiatives and committed scientists who are now fighting for the survival of the ruins. Among them are archaeologists, taxidermists and conservation specialists from Germany. For example, researchers from the Technical University of Munich (TUM), the Fraunhofer Society and ICCROM support the Pompeii Sustainable Preservation Project. They want to find out by 2023 how the world cultural heritage site of Pompeii can be saved from decay.

Pompeii in literature an Media

The fall of a Roman city was an earth-shattering event. The way the subject is dealt with in literature, art and media is correspondingly diverse. The oldest documentation of the natural catastrophe are the letters of Pliny the Younger to the Roman historian Tacitus. As the only written eyewitness account, they provide a basis for many other works. A remarkably complete picture of life and death in a Roman city is given in the book by Robert Etienne.
Numerous directors tried their hand at the realisation of the theme. In most cases Pompeii and the volcanic eruption were reduced to a background story.